The original plan was to do some touring out at Hilda Ridge, but Ingmar couldn’t use the car, and I was heading to Canmore and wasn’t keen on an additional 3hrs driving… so we settled on something a little closer: The Palisades.

I had been part of the way to the Palisades numerous times to check out the Pyramid Bench karst. Now that there was more snow cover it seemed like a good time to check out the lookout and enjoy the ski back down.

Quinn and I headed of and picked Ingmar up from the other side of town before continuing up to Pyramid Lake.  I thought it was mostly downhill to the lake ‘drainage’ (better word?), so didn’t put my skins on. Ingmar followed suit, whilst Quinn decided to skin it. There was a lot less downhill than I remembered, and Ingmar and I weren’t much faster. Soon we were at the view point at the end of the lake. Attaching the rest of our skins, some cross-country skiers, crashed on the bridge.

It was then many hours of skinning. We paused at the lookout above the canyon. More skinning. The junction to the Palisades was more obvious than I’d expected. It was taking a while and we were talking less and less. Quinn and I had some hot spots developing in our boots. Onwards we pushed.

As it got steeper, there were sections of the old road covered in consolidated snow drifts – they’d be interesting to ski on the way down I thought.

As we climbed higher the temperature dropped, the trees taking on a white, and the snow feeling deeper and less compacted. 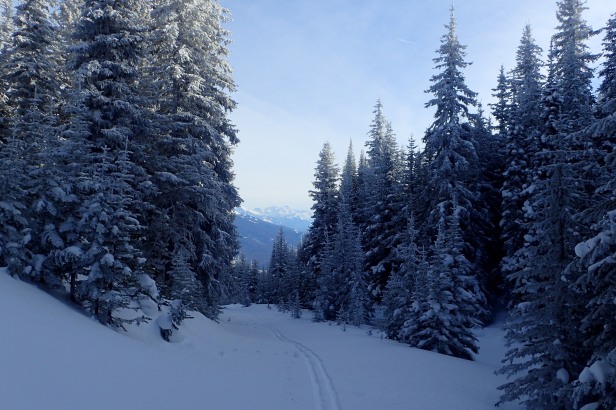 I got to what felt like the top, but wasn’t sure which way to go. I tried my phone to look at some maps, but it had died in the cold. I continued down what looked like it could have been an old road, but after 5mins, decided it was wrong and headed back. I started up another direction, Ingmar joining me. Off to the side, the trees opened revealing the valley below. 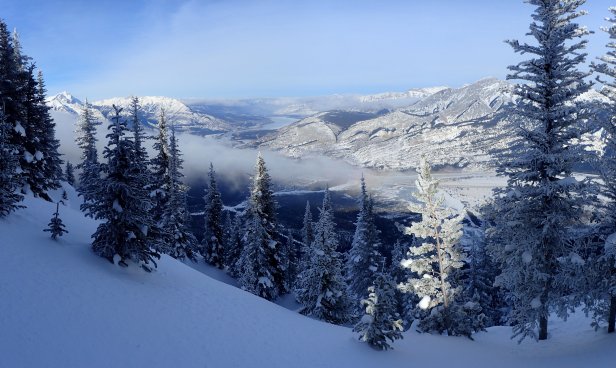 I took photos with Ingmar’s camera for him, before continuing up and locating some old tracks: we were in the right spot we figured.

I sat down on my ski tips, enjoying the views and some scroggin. We sat there watching the clouds blow by hitting some imaginary line and slowly disappear. A train went by, the sun reflecting off its sides making it look like it had strange lights – reminding me of the ‘Night Train’ cyanide millipede. The sun projected a strange rainbow into the drifting clouds. You could see Morrow Canyon, and also Garonne  Canyon – one I had not yet explored.

We were getting quite cold and the wind had picked up. As much as we wanted to stay  it was time to move on. The good news: it was pretty much all down from here!

I couldn’t believe how fast we got down! it felt like about a tenth of the time it had taken us to get up.

Instead of the last bit of the road, we walked across the frozen lake – a lot less up and down! Now I had to pack and head to Canmore. 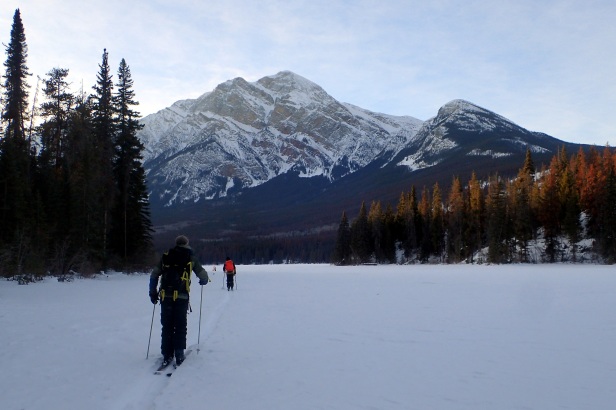