With the whole family plus visitors, the first day of replacement Bungonia was to be held around Blackheath.

Taking two cars, we first visited Pulpit Rock. The wind was crazy here and you really needed to hold on to your hat!
There was a small area off to the side with a small overhang that offered a refuge from the wind.
On the pulpit Lukas/Bugs discovered a slot beneath the walkway. You could climb down this some way. 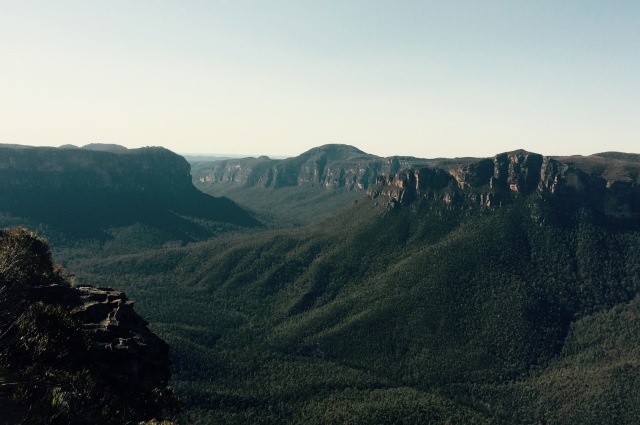 Lukas, Bugs and I spent some time balancing on the railings before our next visited to Anvil Rock and Wind Eroded Cave.
From hear I spotted some rocks that looked like they would make for a fun mult-pitch trip! 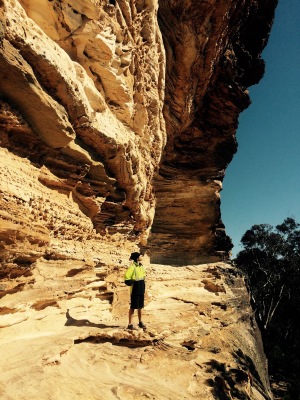 Our next destination was Hanging Rock on the other side of Hat Hill Creek… Instead of driving around, I thought ‘why not just walk there? surely the canyon inbetween shouldn’t be too much trouble!’

So, I headed out along the walking track that leads over Hat Hill and continued along Bald Head Ridge to Bald Head. I could make out Hanging Rock from here but couldn’t see the others yet.

I headed back to the saddle and followed one of the side creeks to the main system. There was a short section of canyon at the end and then an abseil next to an arch… trying the next creek to the south I found I could scramble down into the canyon.

I’d been meaning to visit this canyon for some time, but never thought it would be as beautiful as what I found.
There was definetly no way up on the other side… so I started reversing the canyon. Soon I was forced to take my shoes off and pull up my thermal pants… but soon the water became even deeper. Shivering, I tried scrambling around up high on the right but was soon stopped at a drop where the ledge had been cut away by a side stream entering.
Despite my careful purposeful movements (I was aware that I was cold) I still slipped and cut my hand quite badly on some cave coral.
I stripped down to my underware and held the bag above my head as I waded through the icy water. Even though I missed FreezeFest it looks like I would get my own personal rendition of it.
My feet went numb before I got to the other side but stopping wasn’t an option so I continued onwards across some logs.
There where a couple more wades before I noticed a worn path through the canyon and could eventually put on some dry clothes.

It wasn’t too much further along that I found a place to scramble up. The sun never felt so good. There was a small rock climb to gain the main the ledge below the upper cliffline. I then headed in the downstream direction trying to find a way up.
After a couple of failed attempts (one involved trying to climb up a tree, and another where  I managed to climb up a small waterfall by propping up a stick) I found a relatively easy way up through the cliffline.

I had contacted Dad, when I got out of the canyon to let him know what was taking me so long so new they would be on their way back to the cars.
I hurried along the FT and found Mum and Nam waiting for me at the car park, apparently they hadn’t been there too long. 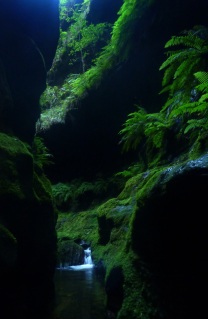 On the way back we stopped at the lolly show in Hartley. Sidney and Mallte thought this was great! Apparently they don’t really have lolly shops in Germany.