You are the leader of this trip

Date:20/06/2015 – 21/06/2015
Leader:Felix Ossig-Bonanno
Email:felixrulz@hotmail.com
Phone:0450110467
Description:
Looking at doing an overnight trip this weekend. Hopefully with cycling and koalas – but might do something else (so let me know either way).

Would like to do some searching for some koalas to contribute to the Blue Mountains Koala Project (http://scienceforwildlife.org/iconic-koalas/).
Alice has used the vegetation from existing koala colonies to predict other possible locations; both for studying existing populations and also for potential rehabilitation/release (Alice gave the recent Koala Workshop).
I want to visit one or two locations and have a go at some koala spotting!

The trip I dreamt up yesterday involves a 13km cycle on firetrail. We will then move our gear from panniers to backpacks and have at least a 11km off-track walk…
Similar distances on the return trip – possibility of a canyon. Never been there before, so will be of an exploratory nature!
Will be an early start on the Sat. Maybe people would like to catch the train into the Mountains with me on the Friday night? – otherwise a 3am train on Sat :S

If there isn’t enough interest in the cycling component I will do a an overnight walk instead. But this will also mean no koala prospects 😦

Hope to see you there 🙂

An old tractor next to the dilapidated farm sheds.

Lots of Stink Bugs on a tree above Rocky Ck.

Strange blue fungi – I can’t remember seeing these before!
https://foragersyear.wordpress.com/2013/04/28/stinging-nettle-urtica-spp-the-weed-that-is-a-food-that-is-a-tea-that-is-a-medicine/

(left) apparently this was done by Sulphur-crested Cockatoos (between Rocky Ck and our camp) (right) this was on a previous trip to Zorro Canyon – apparently also cockatoos. 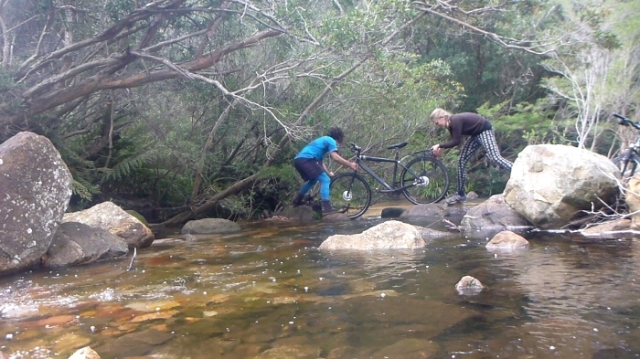 A bicycle portage – much more efficient on the way back!

Animal Cameras:
1 on the stretch of road we walked
at least 3 more on the cycle after Rocky

Timings:
Left the Newns Hotel just after 9am
Old farm sheds around 11am
Wolgan Crossing 12:30

Info on the Wolgan Totem Pole:
“The Totem Pole appears to be a conglomerate erosion residual that has been protected by a large cap stone. There is a smaller column nearby, similarly protected by a cap stone. Similar but smaller erosion residuals, complete with cap stones can be seen on the eastern slopes above Annie Rowan Creek.
Further upstream along the Wolgan River there are other pinnacles that don’t have the protection of the cap stone. These pinnacles resemble some of the hoodoos found in Canada.”

“Located in the Wolgan Valley below the Annie Rowan Creek junction – about 1km downstream on the true right (south bank) – about 50m up from the river.”

(left) Joe Mack next to the Totem Pole. This photo was taken on the trip when Joe found the Totem Pole – circa 1975
(middle) Another photo of the Totem Pole taken in 1979. Jayne Hibbard is looking up at it.
(right) the next morning, Joe noticed this interesting feature – he called it the “Totem Pole”

In NSW Government Geologist, Joseph Edmund Carne’s field notebook number 3, Carne included a dimensioned sketch of what is now termed the Totem Pole.
A photo taken soon after, duly records it as the ‘Earth Pillar, The Pinnacle, Wolgan Valley, c1908.’ Later named the Totem Pole by Joseph Mack in 1975  (actually 1974 according to David Noble’s website)
The link section between the surveyed land portions, 2, 3 and 11, which comprise the former cattle holding, Binnings Hole, is now difficult terrain to negotiate.
during the 1970s several 4WD groups attempted to push a road down the Wolgan River  beyond Annie Rowan Creek

Now the road extends about 6 km below Rocky Creek. From Newnes to Rocky Creek it is on the south side of the river, then crosses just downstream of Rocky Creek and follows the north bank for about 5 km, then crosses again to “Sink Camp” and continues for almost another km on the south bank to just below some rock towers. The road is being maintained to allow for NPWS pest control. The Wolgan Valley is the home to a large colony of now rare rock wallabies and they are threatened by foxes. So NPWS contractors lay 1080 to reduce fox numbers. As well, NPWS have been surveying the rock wallaby population for a number of years – and use “Sink Camp” as a base. It is named because it has a sink set up on poles.
The walking downstream from the road terminus seems slower than I remember from the 1970’s. I think more scrub – notably blackthorn, has grown on the banks over the years.
On our trip, we walked down the road, stopping at a nice campsite under Big Glassy for lunch. “Big Glassy” is the rock climbers name for the massive cliff north of the river. It is one place that the half way ledge is so thin that the burra-moko and banks wall sandstone layers have merged. A lot of the rock on Big Glassy is rotten, brittle rock called “choss” by climbers and there is a large roof near the top of the wall – making it a serious proposition for climbers. A friend, the late Andrew McAuley had achieved a number of bold first ascents here.

The road used to go all the way to Annie Rowan Creek, but now it does not. It crosses the Wolgan River at the Rocky Creek junction, then stays on the north side for a fair way, then crosses the river again and goes on the south side for a short section – this is used as access for the wild dog and fox control program – as there is a large colony of rock wallabies living near the current end of the road. Altogether, the road goes for about 6 km below Rocky Ck. Past the end of it – it is quite slow going – off track bushwaking. Sometimes it is better to climb up on terraces a fair way above the river.